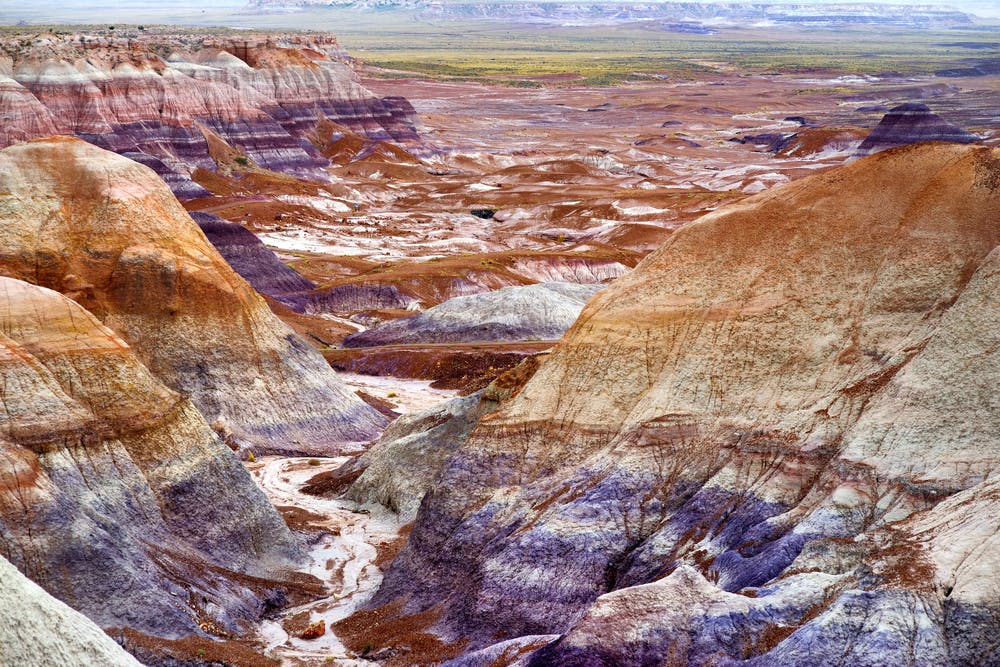 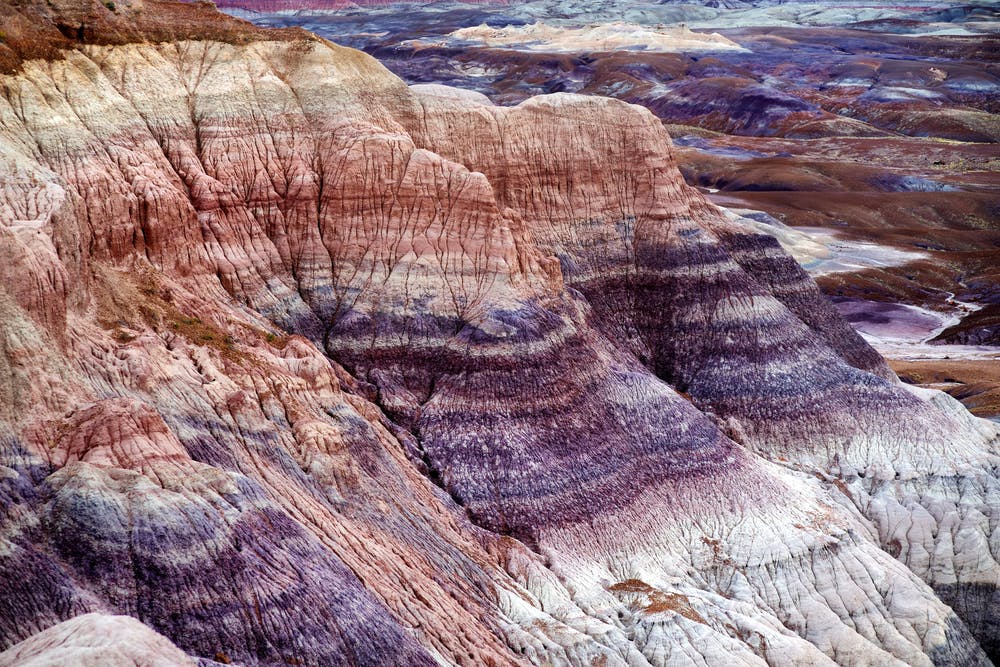 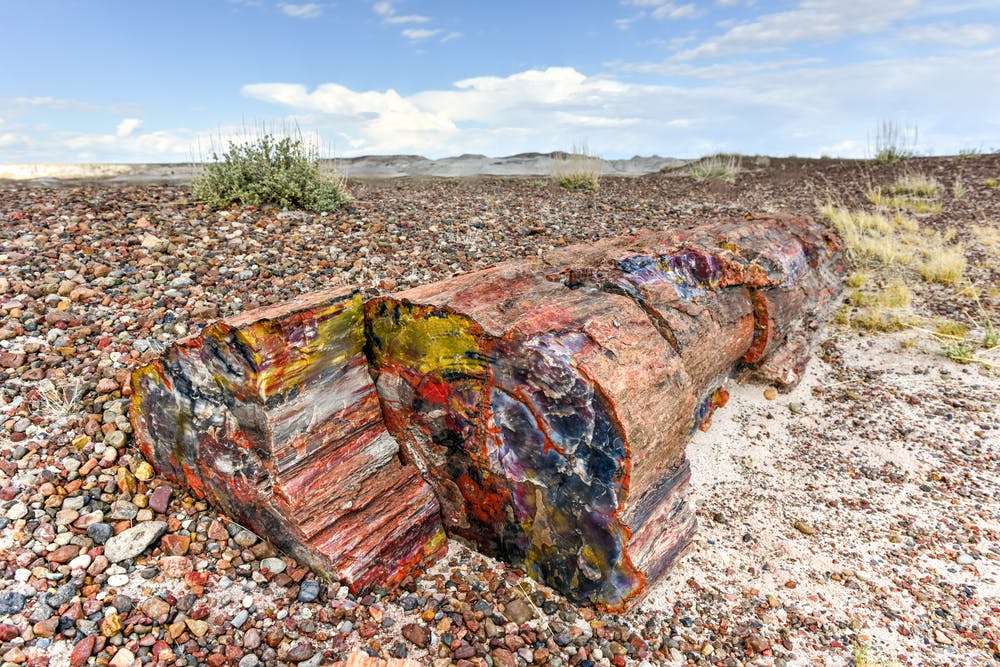 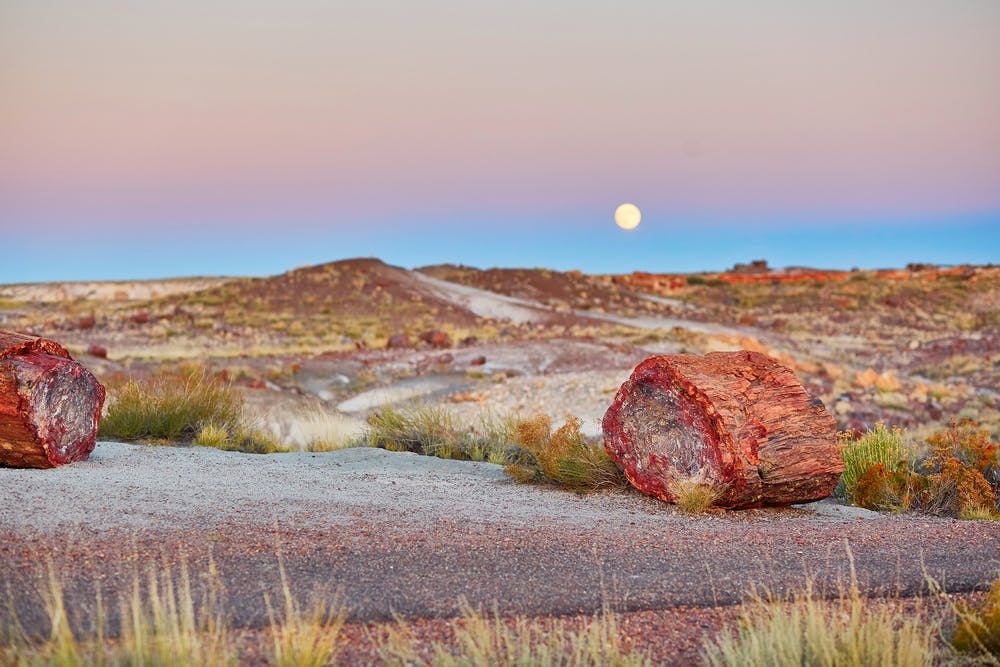 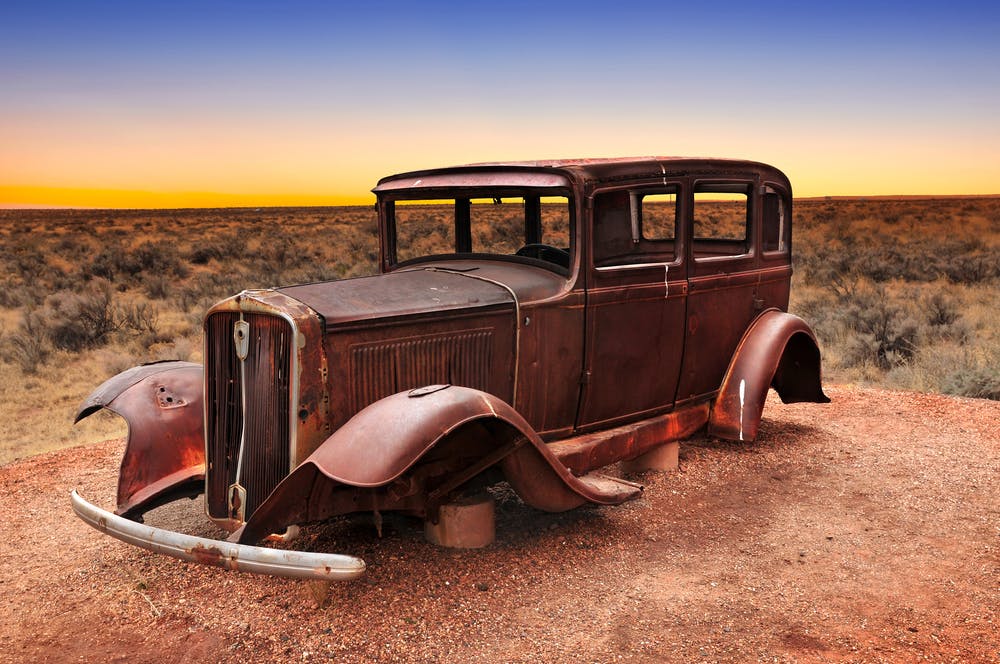 It may not be quite as famous as the Grand Canyon, but no visit to northern Arizona is complete without a trip to Petrified Forest National Park. Covering over 220 square miles of Technicolor desert, there’s way more to this park than its namesake fossilized wood. Petrified Forest is also home to numerous paleontological exhibits, petroglyphs, and a wide range of living flora and fauna, including coyotes, bobcats, pronghorns, and over 200 species of birds. The park’s landscape has been inhabited by humans for at least 8,000 years, and more than 600 archeological sites within the park’s boundaries reveal just a few of our ancient ancestors’ secrets.

Petrified Forest National Park is situated in the northern reaches of Arizona’s high desert climate, which means its temperatures vary widely -- both by season and sometimes within a single day. July highs can easily reach over 100 F, while the winter sees temperatures below freezing and occasional snow storms. Because the weather at the park is so variable, it’s important to dress in layers and bring waterproof clothing. Check the park’s weather page and local forecasts for full and up-to-date details.

The park is located about midway between Albuquerque and Flagstaff, and is easily reached via I-40. Communities in the park’s direct vicinity include the small towns of Sanders, Joseph City, and Holbrook. Winslow, Arizona -- of Eagles song fame -- is about an hour west of the park.

Visitors come to Petrified Forest National Park to enjoy this unique and surreal landscape, a surprising splash of color in the desert’s depths. Along with hiking, backpacking, and horseback riding, the Park Service also hosts a variety of ranger-led events, including guided tours and cultural demonstrations. For full details on current events, check the park’s official calendar before your trip.

There are no developed campgrounds in Petrified Forest National Park, and overnight parking is not allowed. However, RVers can choose from a variety of both public and private camping options in the nearby area.

The best way to experience Petrified Forest National Park is on foot -- and there are plenty of different ways to do it. If a short and relatively easy nature stroll is what you’re after, the park offers a wide variety of designated trails, often with interpretive signage and guidance. Alternatively, if you want to take on a multi-day backcountry camping adventure, you can do that, too -- create your own way “off the beaten path” to discover untold treasures.

Below, we’ve listed a few of the demarcated trails in the park, but you can check out the park’s hiking information page for more details and guidelines. No matter which trail you take (or even if you go off into the unmarked wilderness), do not pick up or take home petrified wood. Doing so is illegal… and also takes away from the park’s beauty for future visitors.

Terrain: This short and easy hike meanders through colorful badlands formations and lots of petrified wood.

Terrain: Take a peek into the petrified wood that litters this trail to see the crystal deposits it’s named for. Short and easy trail starting at the Crystal Forest Viewpoint.

Terrain: See some of the largest, oldest, and most colorful logs in the park along this easy half-mile stroll. The trail is flat and paved but features several sets of stairs.

Terrain: This short, paved, accessible trail takes visitors into the remains of a 600-year-old Puebloan ruin, and features petroglyphs at its southern end.

What to Do at
Petrified Forest National Park

After you’ve had your fill of Petrified Forest’s unique fossilized wood deposits and rainbow-painted sand dunes, get your fill of delicious Mexican food -- or whatever your appetite longs for.

From tasty eats to informative cultural exhibits, here’s what to see and do in northeastern Arizona.

Hiking works up an appetite… and good thing, too. There’s so many yummy options in the area, you’ll want to make sure you’ve got lots of room to try them!

The southwest is basically synonymous with great Mexican food -- so if you’re in the mood for some spice, head to this locally-loved chain.

Yes, you can get authentic Chinese eats in the desert! This casual joint serves up all your favorites, and maybe one or two new-to-you items, too.

Looking for a quick and easy lunch or early dinner that doesn’t require you to leave the park? The Painted Desert Diner is a convenient, on-site solution serving hot dogs, hamburgers, veggie wraps, and more.

There’s nothing like an ice-cold brew after a hot desert day, and if you want to upgrade from that Bud Light in your cooler, this Winslow brewery is the answer. Along with its selection of delicious, handcrafted beers, RelicRoad also serves hearty pub favorites.

Traveling means one thing: you probably forgot something. (Hey, it happens to all of us.)

And even if you’re a packer extraordinaire, you’ll eventually run out of toothpaste. Here’s where to head when you need a quick restock -- or a souvenir to take home for grandma.

Want to learn even more about this surreally beautiful landscape -- and the storied past that made it into what it is today? The following museums and cultural exhibits give you and your family a window into the way things were years ago.

Don’t get us wrong -- simply meandering through the many trails of Petrified Forest could keep you busy for days. But while you’re in the area, there are a few other gems you might not want to miss out on.

“Standin’ on the Corner” Park

How to Get to
Petrified Forest National Park

Although it’s in quite a remote location, Petrified Forest National Park is easy to access thanks to its proximity to I40, also known as historic Route 66. The highway runs directly adjacent to the park, and exits are well-marked with directive signage.

The nearest airports to Petrified Forest National Park are in Flagstaff, Arizona and Gallup, New Mexico; large hubs are available in Phoenix and Albuquerque. For those with access to private planes, there is also a small airstrip in Holbrook.

Renting an RV is an ideal way to experience America’s desert southwest, including Petrified Forest National Park. A motorhome or travel trailer gives you the best combination of road-trip flexibility and private-bungalow comfort and convenience. You can easily stitch together an epic, winding tour of the nation’s parks without ever having to repack your suitcase (or grimace through a night in a so-so hotel room).

The following prices cover entry to the fee area of Petrified Forest National Park, and buy you unlimited access for seven consecutive days. If you’re a frequent visitor or are planning to visit multiple parks this year, you might also consider purchasing the $80 America the Beautiful annual pass, which gets you entry into more than 2,000 national federal recreational areas.

Private, non-commercial vehicles (15 passenger capacity or less) and all occupants.

One or two passengers on a private, non-commercial motorcycle.

One individual with no car (bicyclist, hiker, pedestrian). Youth 15 and under are admitted for free.

Whether you fly, drive, or even walk in, we’re standing by to see all your gorgeous photos and hear your travel stories! For a chance to have your pictures featured on our social media channels or blog, tag us in your posts -- or send details to us directly at memories@rvshare.com.