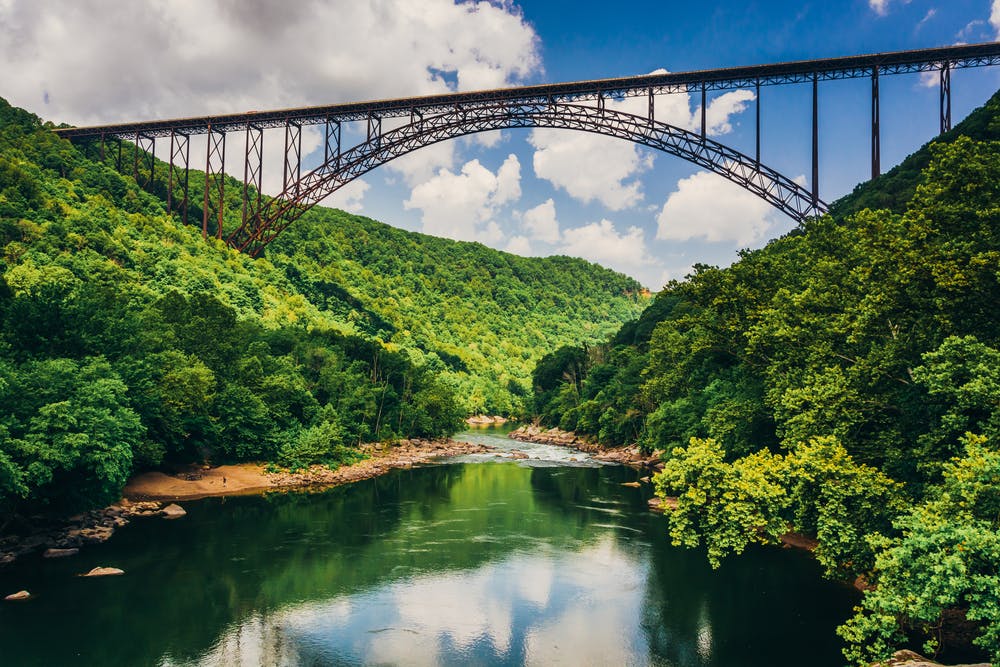 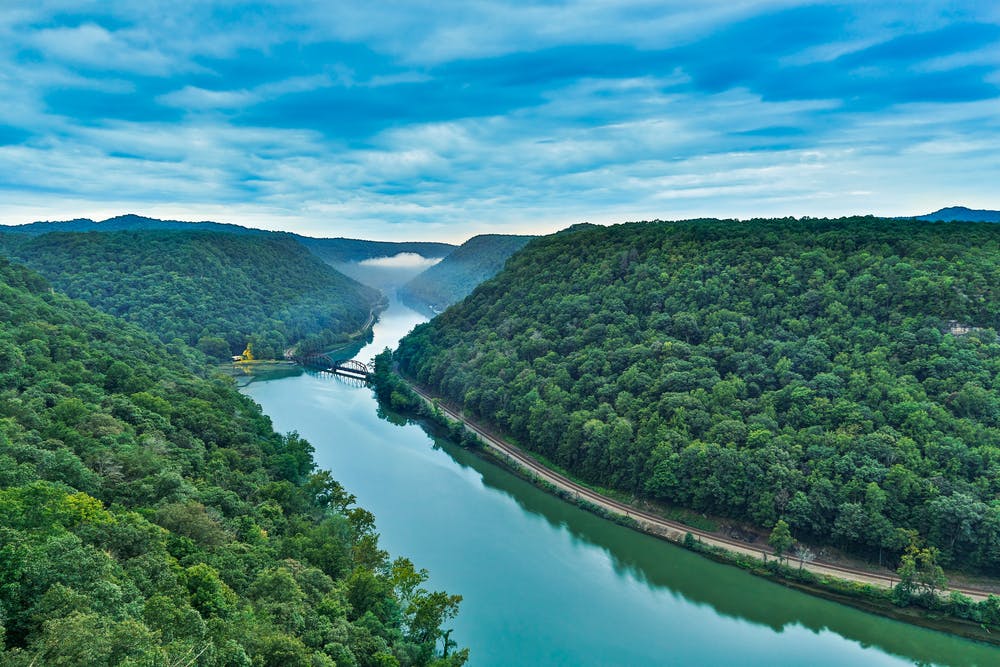 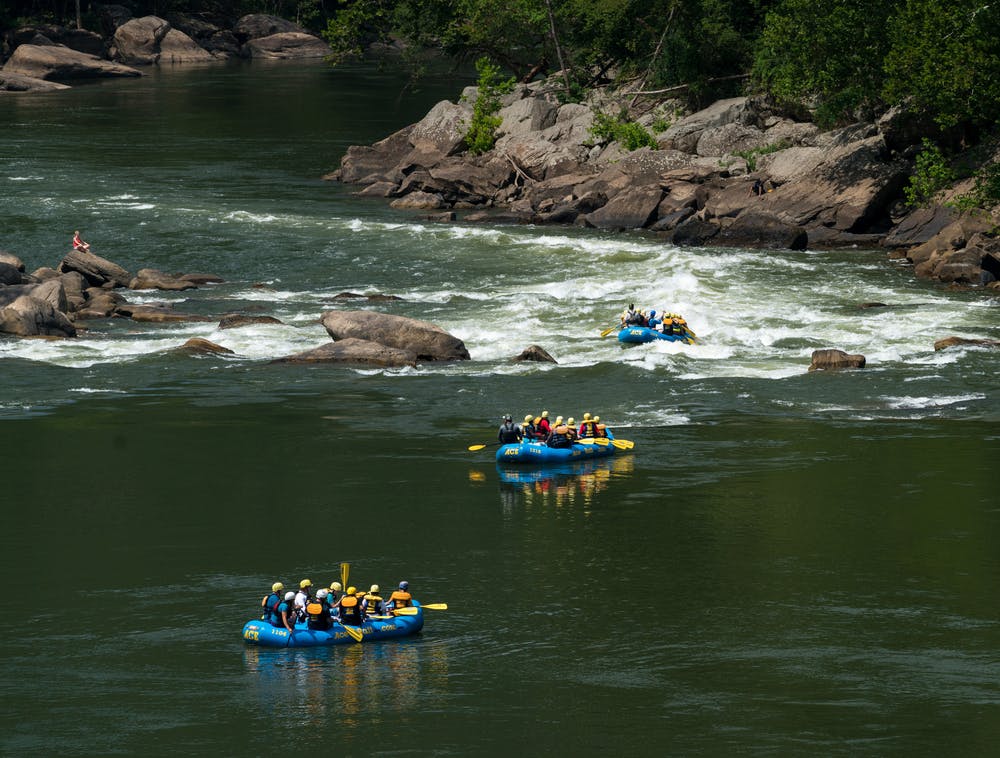 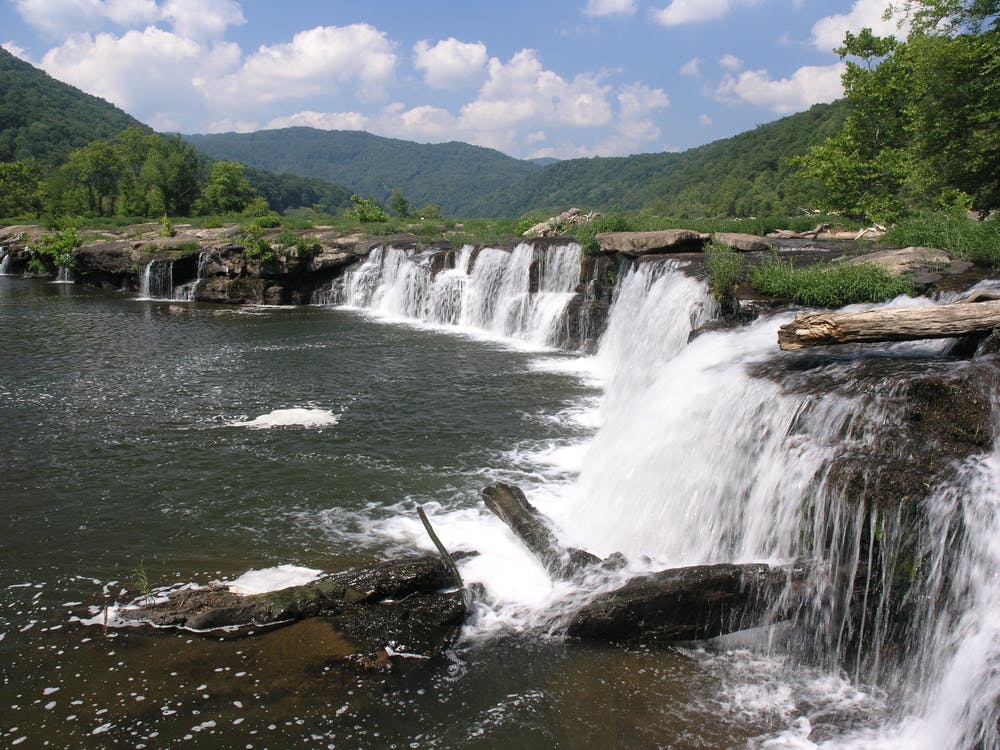 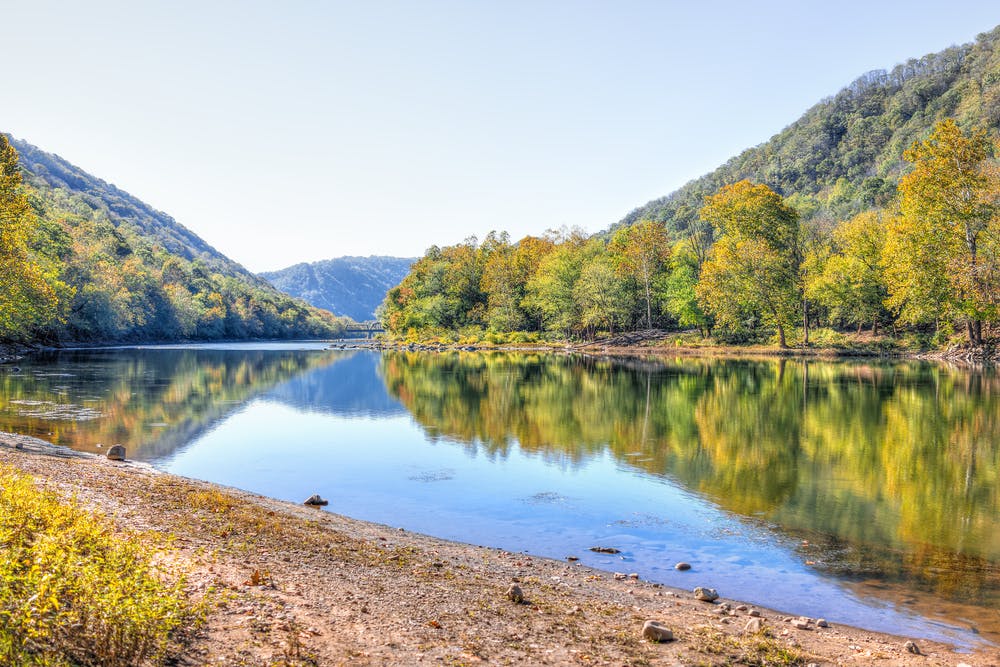 Despite its name and although it was only recently designated as a national park, New River Gorge is anything but — this incredible gorge, similar to the Grand Canyon or Columbia River Gorge of the west, has been carved out over the eons by the soft but persistent power of flowing water. Along with the mighty New River itself, this West Virginia wilderness encompasses a vast and vivid 70,000 acre stretch of countryside, and offers a huge array of both land- and water-based recreational opportunities.

Tucked into south-central West Virginia, New River Gorge National Park and Preserve (which was just upgraded from National River status at the end of 2020) is located about an hour from Charleston, WV, close by to small towns such as Beckley, Beaver, and Hinton. It’s also only a short distance from the Virginia border and towns in that state like Roanoke.

New River Gorge is characterized by its carved-out river canyon, which is populated with beautiful Appalachian greenery that paints the rolling hills that spread out from the water. As in most parts of the Appalachian Mountains, weather can be unpredictable and quick to change, but generally, you can expect temperatures between the 20s and 40s in winter, 30 and 70 in spring and fall, and pleasant summers that range from 50-80 degrees. Precipitation can occur year round, but the wettest month is July.

Traveling by RV? While there are no developed campgrounds offering electricity and water hookups to motorhomes and travel trailers inside New River Gorge National Park, there are some wonderful primitive accommodations — many of which cost $0 nightly. There are also resort-style developed campgrounds in the surrounding communities!

Hiking is one of the primary reasons people visit this stunning ancient river gorge in the first place — and there are so many trails in the area, it can be difficult to figure out where to start. No matter your fitness or ability level, there are hikes available to help you get better acquainted with New River Gorge National Park.

Terrain: Perhaps one of the most beloved trails in this area, the Endless Wall Trail offers stunning views with relatively little elevation gain — just under 300 feet. Keep in mind that the 2.3-mile distance is one-way; the trail can be made into a loop by walking along the road, resulting in a total distance of closer to 3 miles, or you can turn around and come back the way you came for a total hiking distance of about 5 miles.

Terrain: Short and accessible to those in wheelchairs or using strollers, Canyon Rim Overlook Boardwalk includes sweeping views of the New River Gorge Bridge, which sits suspended almost 900 feet above the New River below. Although the first section of this trail is easy and fully accessible, a lengthy 178-step staircase leads down to the observation deck.

Terrain: Seeing a little more than 300 feet in elevation gain, this trail is still in the easy-to-moderately-challenging category and offers beautiful vistas of both the forest and the river. Keep in mind that this trail descends before it ascends, so make sure you conserve your energy on the way out.

Terrain: A hike that travels down into the gorge from the outside, this trail includes about 400 feet of elevation gain, most of which occurs in a steep descent (which you’ll have to climb back up) right before you reach your destination. Once you arrive, you’ll enjoy a comprehensive view of the New River Gorge Bridge and the endless Appalachian sky above. This trail is considered moderate to challenging.

Terrain: Short but sweet, the Kaymoor Miner’s Trail follows a swift, 900-foot descent down to the remains of an old mine; from there, the hike continues to display waterfalls, cliffs, and remarkable gorge views. Just keep in mind you’ll have to retrace all your steps down right back up again. This trail is on the challenging end of moderate.

What to Do at
New River Gorge National Park

Although it would be easy to spend an entire lifetime simply exploring the National Park itself, there are a great many other attractions to add to your itinerary in the area. From down-home southern cooking to shopping, museums, and more, here are our best suggestions for what to do while you’re in town.

No matter what you’re craving, you can find satisfaction in wild and wonderful West Virginia.

The local branch of a small but well-known chain in this part of the country, Cook Out offers a delicious menu of comforting favorites like hot dogs, hamburgers, and southern-style BBQ plates that will give the best local pit a run for its money.

The Market on Courthouse Square

Offering single-serving and family-sized dinner specials along with pizza, salads, and an array of other comforting and classic American dining, The Market on Courthouse Square is located close to the park proper and is a great place to grab some delicious take-out to enjoy in the comfort of your own home (or RV!).

From classics like steak street tacos to more inventive (but delicious) delights like chorizo cheese fries, El Mariachi is the local go-to for all things Mexicano. Along with your meal, enjoy a flight of four expertly-mixed margaritas to wash it all down with. Just make sure you’ve brought along a designated driver!

Offering freshly-made Tuscan delights in a beautiful atmosphere that feels like you’re in a dear friend’s living room, it’s easy to see why Pasquale’s is considered one of the best restaurants in the whole state, let alone the Beckley area. Be sure to save room for some tiramisu or spumoni for dessert!

If the only thing you find more refreshing than a great meal is a delicious, carefully crafted beer to wash it down with, Weathered Ground Brewery is a must-visit for you. Along with their homemade suds, this spot also serves up casual favorites like chips and salsa, buffalo wings, salads,  and brick oven pizzas.

Left something important behind… or just feel like doing some window (and not-so-window) shopping? Here are some of the best spots to peruse in the area.

Tamarack: The Best of West Virginia

Whether a rainy afternoon has you craving some indoor time or you’re just anxious to learn more about this area (and the world in general), here are some of the best museums to check out near New River Gorge National Park.

So much to see and do, so little time! Here are some not-to-be-missed sightseeing opportunities near the National Park — some of which, you’ll soon see, are actually underground!

How to Get to
New River Gorge National Park

Now that you’re eager to explore New River Gorge National Park… how do you get there?

The closest major airport to the park is located in Charleston, West Virginia, which is about an hour away — you’d need to arrange ground transportation once you’ve arrived. Amtrak and Greyhound routes make stops in local areas, and taxis are also available.

For full directional information, including GPS coordinates for various park hot spots, check out this page.

Although there are many ways to make your way to New River Gorge National Park, an RV really does offer some of the best bang for your buck as far as privacy, safety, and comfort are concerned. Once you rent an RV, you’ll have your very own getaway bungalow on wheels, which means using your own bathroom throughout the trip and also being able to prepare your own meals, which can help you save money! (Psst: you can save even more cash on your adventure by opting for a peer-to-peer RV rental through RVshare, where you rent directly from owners and save both money and hassle in the meantime.)

No matter how you make your way to New River Gorge National Park, we can’t wait to see and hear all about your adventure! Tag us in your photos and stories on social media @rvshare, or send details of your trip to us directly at memories@rvshare.com. Who knows? We might just feature you in an upcoming blog post or social media post of our own!