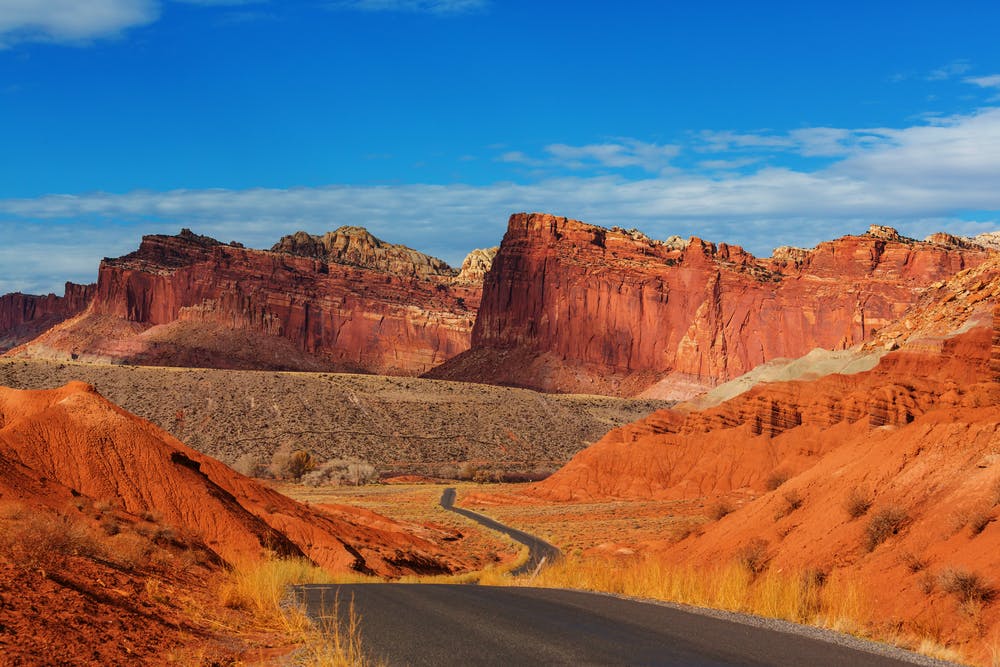 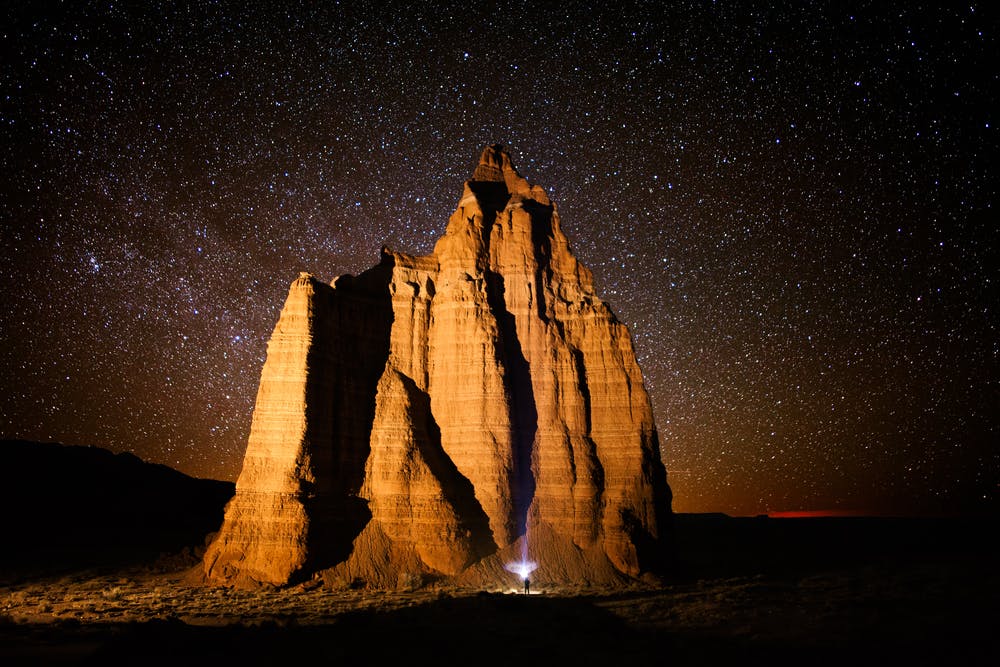 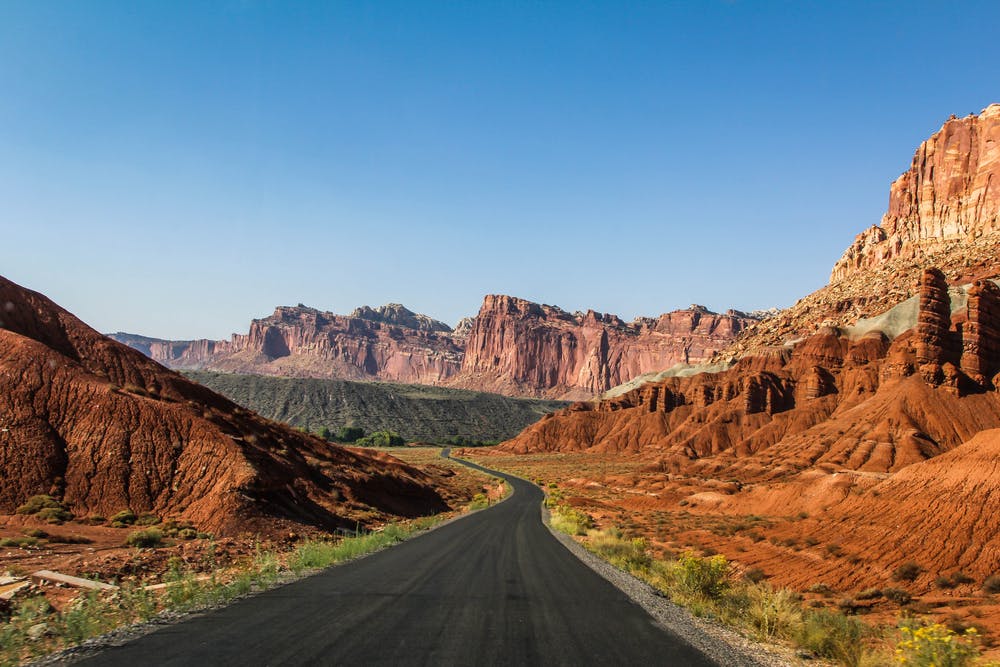 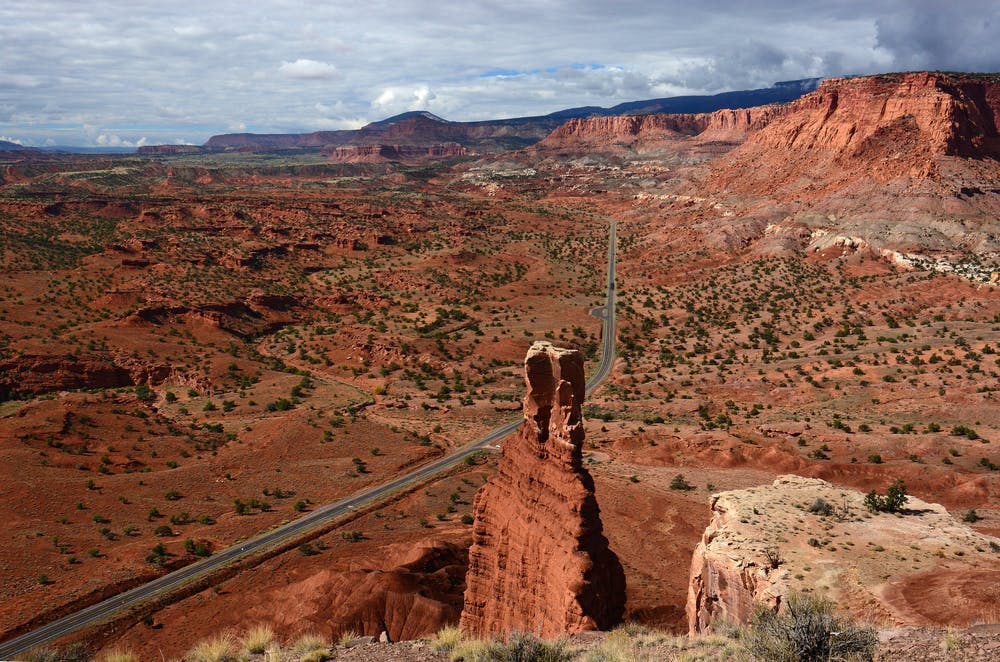 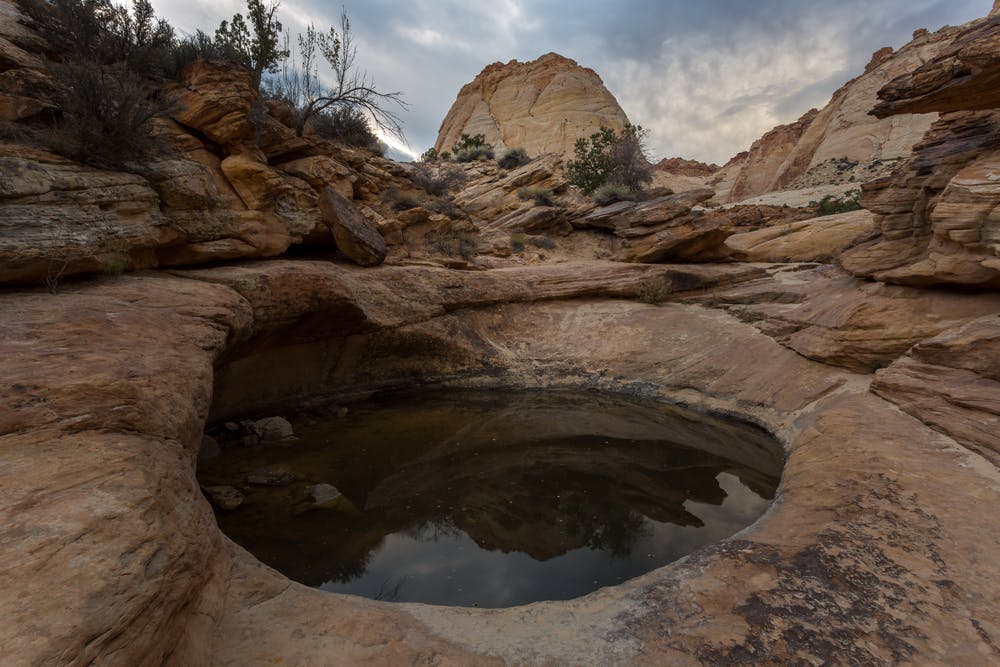 Explore a wrinkle in space-time -- or at least in the earth’s surface -- at Capitol Reef, a south-central Utah national park filled with canyons, cliffs, bridges, domes, and other unique rock formations. Surrounding the geological wonder known as the Waterpocket Fold, the park is known for its fairytale landscape, boasting a variety of landmarks like the Chimney Rock pillar, the Hickman Bridge arch, and Cathedral valley. Capitol Reef National Park is also home to over 2,700 fruit-bearing trees, situated in its historic orchards; cherries, peaches, apricots, plums, mulberries and more are seasonally available for fresh picking.

Situated squarely in the desert, Capitol Reef sees less than 10 inches of rain per year, though it does experience some snowfall over its chilly winter. Daytime temperatures in July and August can climb past the 100 F mark, but the climate is generally temperate and pleasant, with highs in the 40s even in December and January.

Although undeniably remote, Capitol Reef is served by a variety of small gateway towns which offer lodging, restaurants, and other attractions to visitors - the closest and bustling-est of which is Torrey. Park-goers can also reach Grover, Teasdale, and Bicknell within a few minutes, or the large city of Provo within two and a half hours.

With hiking, biking, horseback riding, and backcountry camping opportunities galore, Capitol Reef draws thousands of visitors each year. Along with these attractions, the park also hosts a variety of ranger-led programs and activities, aimed both at increasing guests’ understanding of the landscape and offering expert perspectives on its iconic features. Click here to learn more about the ranger programs offered on a daily basis, and check out the park’s official events calendar at this page.

This one-of-a-kind landscape has sustained human life since long before European settlers knew about it. From the ancient Paleo-Indians who roamed here some 12,000 years ago to the more recent Ute and Southern Paiute peoples who were displaced from it, the land we now know as Capitol Reef has a much deeper and richer history than the average visitor knows. Learn about the history of the land known today as Capitol Reef here.

While Capitol Reef only has one developed campground open to RVers, there are a wide variety of privately-owned RV parks to choose from in the area, as well as a few free and low-cost boondocking spots.

To learn more about camping in and around Capitol Reef National Park, including important information about campground regulations and restrictions, click here.

What to Do at
Capitol Reef National Park

While you could easily keep yourself busy with the park alone for a lifetime, there’s way too much to see, do, and eat in Utah -- and you don’t want to miss out! Whether you’re looking for a life-changing burger or a chance to learn more about the people who walked these lands before us, you’ll find more than enough options to keep you occupied in the Capitol Reef area.

The wide-open west is subject to a number of stereotypes, not all of which are accurate -- but its tendency toward hearty, cowboy-ready eats is more truth than fiction. Here’s where to grab a (big) bite before or after you work it off on the trails.

Open seasonally between March 15 and October 31, the Broken Spur won TripAdvisor’s Certificate of Excellence in 2016 -- and once you taste their fresh-cut steaks, you’ll see why.

It’s not a trip to the American southwest without some serious Mexican cuisine, so get yours at this local favorite. From nachos piled high with chorizo and fixings to classics like flautas, mole, and chimichangas, you’ll definitely find your favorite south-of-the-border fix here.

Come in for a filling and affordable lunch or dinner at this casual joint, owned by locals who make their meals with love.

Did someone order dinner with a view? That’s what you’ll get at this rustic hotel’s accompanying eatery, which opens for supper each evening at 5 between March and October. (For a more casual affair and daytime eats, check out the same joint’s Patio.)

Sometimes, the only thing for that post-hike exhaustion is a greasy mess of deliciousness. So if you’re in the mood for a piping hot burger served with a heap of fresh-cut fries, don’t miss this well-loved comfort food stop. (Our suggestion: wash it all down with a Kit-Kat milkshake.)

Maybe you need a new pair of hiking boots… or maybe you’re just in the mood to browse the gift shop. (Even if the potential gifts are for yourself.)

As much as we enjoy our time outside, we’d be remiss to miss out on the incredible cultural and educational opportunities in the Capitol Reef area. If you’re facing a rainy day (or you’re just in the mood to skip the sunscreen for a few hours), check out these nearby exhibits.

With more than 370 square miles of stunning desert landscape to explore, Capitol Reef certainly offers no shortage of scenery. But you’re in Utah. And that means that one national park is just the tip of the iceberg. Utah boasts five national parks and innumerable state parks, national monuments, and other federal recreational areas. We’ll list a few unmissables below, but check out the NPS website for a complete list of other sightseeing opportunities in the area.

How to Get to
Capitol Reef National Park

Although undeniably remote, Capitol Reef is serviced by a number of large interstate highways, including I70 and I15. For full details on how to approach the park by motor vehicle from a variety of orientations, check the park’s website -- and don’t rely on your GPS system, which can miscalculate routes in these remote areas.

Flying in is another option, but due to the park’s location, you’re in for a drive, as well. The closest major airport to Capitol Reef is Colorado’s Grand Junction Regional, which is still 186 miles away; you could also fly into a relatively nearby hub like Salt Lake City or Denver.

Whether you fly in and rent on-site or drive it from your hometown, we highly recommend you try out an RV for your Capitol Reef vacation. If you’ve never camped in a motorhome or travel trailer before, you’ll soon discover why it’s such a popular form of travel -- and growing in popularity year over year! RV camping combines all the best aspects of road tripping with the comforts and conveniences of home. And since there are so many campgrounds in close proximity to the park gates, you get a front-row seat for all the action. To learn more about RV rental opportunities in your area, check the listings at RVshare. Renting by owner can mean getting the same vehicle for a fraction of the price -- and since they’re actually used for vacationing, the rigs are usually even better!

As is the case with many of the national parks, there is a fee to get into Capitol Reef -- but your funds go toward maintaining the park, and buy you a seven-day pass automatically. Here are the latest entry fees at Capitol Reef National Park:

Private, non-commercial vehicles (15 passenger capacity or less) and all occupants.

One or two passengers on a private, non-commercial motorcycle.

One individual with no car (bicyclist, hiker, pedestrian). Youth 15 and under are admitted for free.

If you’re planning on visiting several of Utah’s national parks, or doing a larger tour of the American southwest (sometimes known as the Grand Circle), it may be worthwhile to invest in an America the Beautiful Pass, which gets you a year’s access to over 2,000 federal recreation sites for only $80.

Here at RVshare, we’re always eager to share travel stories -- and we want to hear yours! Tag us in your photos and posts for the chance to appear on our own social media channels, or send the juicy details directly to us at memories@rvshare.com. Enjoy your trip!